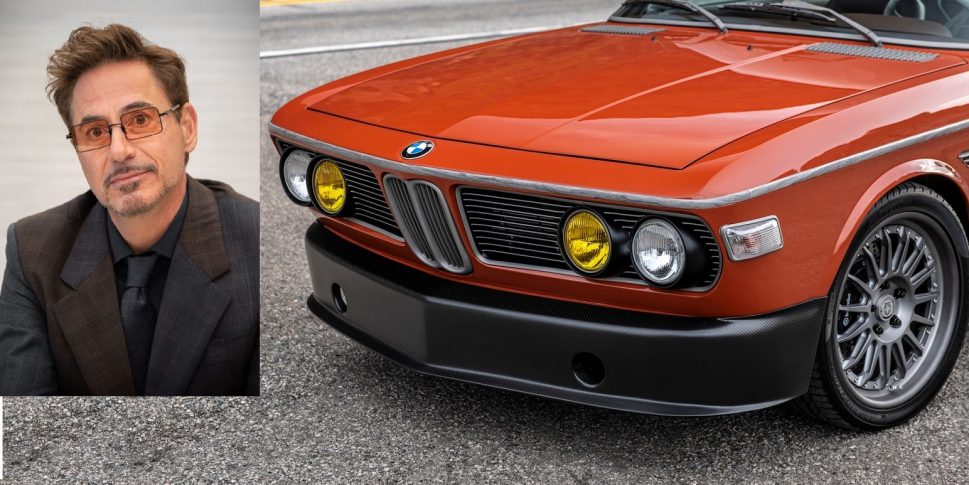 I am not a big fan of movies. But I am pleasantly surprised that Robert Downey Jr. (RDJ) is a classic car enthusiast. The Ironman has teamed up with Speedkore to restomod a 1974 BMW 3.0 CS. Within the last few years, Robert has commissioned several builds from Wisconsin’s Speedkore Performance Group. Out of all these cars, his latest purchase from the Grafton outfit is the most interesting to date. In this article we are going to see the details about this car. Let us start with the restomod company Speedkore.

Speedkore is an American Performance Company specialized in custom performance vehicles, carbon fiber composite part manufacturing and engine integration. At SpeedKore, high performance vehicles are engineered and manufactured from the ground up in Grafton, WI facility. Their vision is very simple: reduce weight and increase horsepower. The SpeedKore advanced composite team sheds weight from each vehicle with custom, lightweight prepreg autoclave carbon fiber. Increased power is achieved through pairing the updated, lightweight chassis with fine-tuned, high-power drivetrains specifically modified for each vehicle. No wonder why, many celebrities have purchased exotic vehicles and restomod vehicles through Speedkore. You should definitely check their website here for more details. 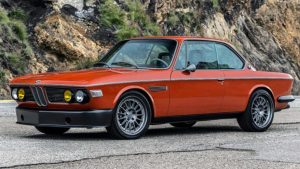 As mentioned earlier Robert has purchased many cars from Speedkore. Out of all his purchases, the latest one is unique. It is a classic 1974 BMW 30 CS restomod. I absolutely adore this car for two reasons.

Let us go through the build in and out in this article. 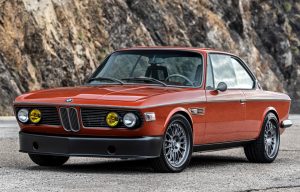 Speedkore has moved away from its traditional all carbon fiber body for Robert Downey Jr. This BMW 30 CS is built with aluminum like it’s original build. 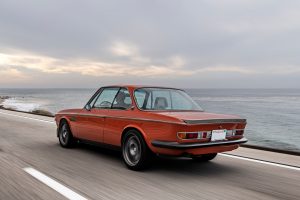 The paint job is a muted shade of brick-red. It servers two purposes. 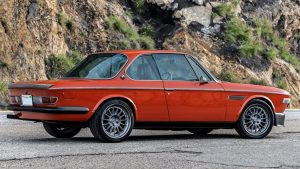 The side rocker molding is finished with exposed carbon fiber. The dark black really maintains its originality. When you look close, you can see the carbon fiber weave. 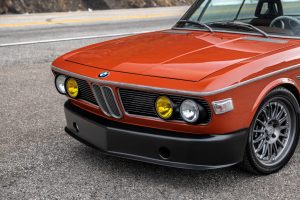 The front air ram is also made of carbon fiber material. Speedkore made sure that the carbon fibers are added only to places where the classic European styling is not affected. 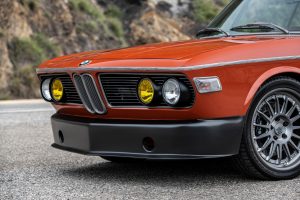 The front bumper is also fully made of carbon fiber. 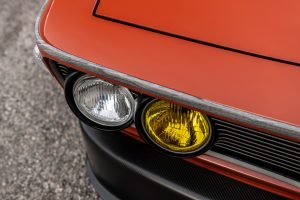 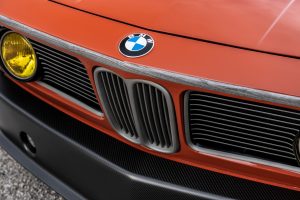 This wood grain finish is running all around the car. It matches the matte finish of the iconic BMW grille as well. 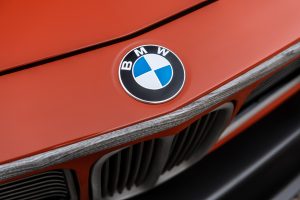 The BMW badge also retains its originality with no fancy crystal or whatever you see normally in flashy celebrity modifications. 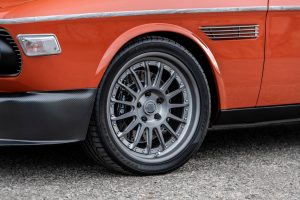 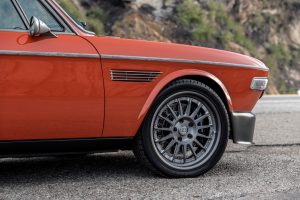 The tyres are Pirellip P zero tyres known for performance and durability. 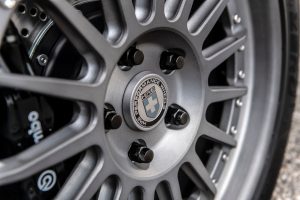 No car can be called a performance car without Brembo breaks. This BMW 3.0 CS is also fitted with massive Brembo breaks with matte black finish. 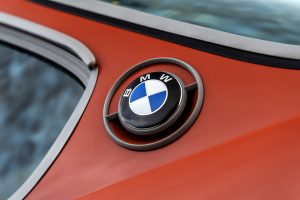 The chrome trip is matted in order to go along with the grey wood trim. Evidently, all around the car it is visible. It is predominantly seen in the BMW emblem on the C pillar of the car as well. 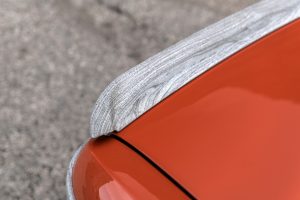 The rear spoiler is also finished with the grey wood grain styling. It is subtle and I am not sure how much down force it can produce. As long as it is not taken to the Iron Man set it should be fine. 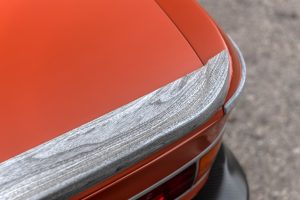 The wing has been perfectly designed to match the Euro styling. Instead of a massive wing normally seen in performance cars, SpeedKore has chosen to go with ah subtle wing. It really adds beauty to the already beautiful, classic European design. 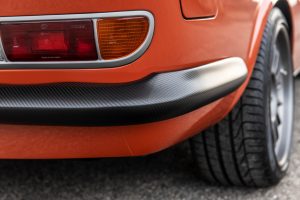 The rear mudguard is also finished with dark black carbon fiber. From a distance, it looks like normal black bumper. But when you come close and see, you will notice the carbon fiber weave. Very nice attention to detail. I really appreciate the overall exterior finish of Robert Downey Jr.s 1974 BMW 3.0 CS exterior design.

While the car’s exterior certainly nails the “contemporary design” half of the brief, the interior is where you truly get a sense of the car’s European heritage, also with a twist. 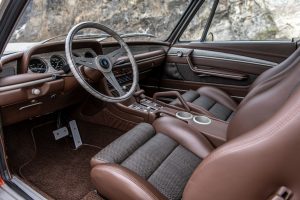 SpeedKore created an Italian-inspired cockpit. It is boasting a chocolate-hued leather finish throughout. It also has a grey pebble weave inserts on the seats which is really amazing. 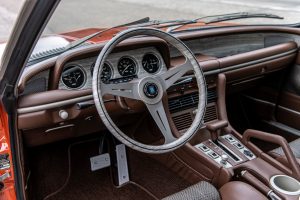 The car has a classic-looking instrument cluster and a hidden touchscreen to preserve the car’s classic roots.

Checkout our review of the BMW M5 Competition here. 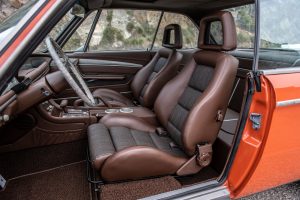 The styling of the seats are all original. The big hollow head rests looks so modern but still maintain its original European styling. 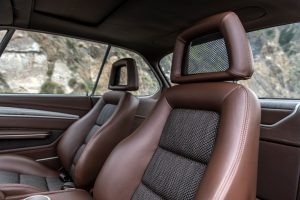 The grey pebble weave inserts on the seats and the head rests matches well with the chocolate leather finish. 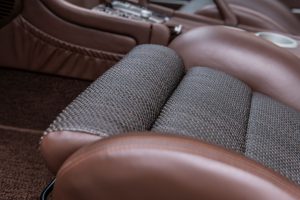 The grey pebble weave also matches the grey wood grain finish on the outside as well as the dash area. 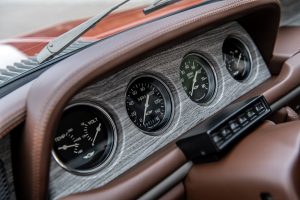 The dashboard has leather trim on the borders . The flat driver facing surfaces are finished with the same grey wood grain as the outside. 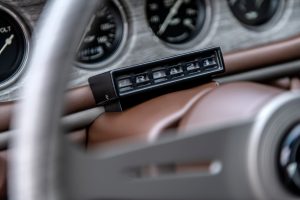 All the dials and controls are original as seen from the pictures above. 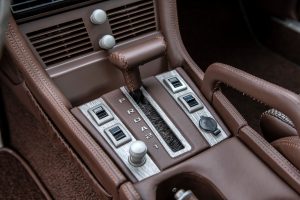 Even the center control looks really good with the same chocolate leather finish all over. The leather stitching are all hand made. 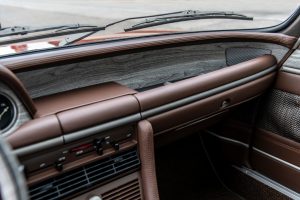 The passenger dashboard also boasts a large grey wood grain finish that curves and carries on to the side doors. Overall, the interior design cannot be any more beautiful. It is very impressive. 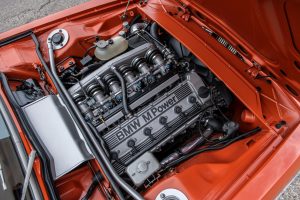 Speedkore specialty is performance. Under the hood of this BMW 3.0 CS is 3.6L straight six BMW engine. 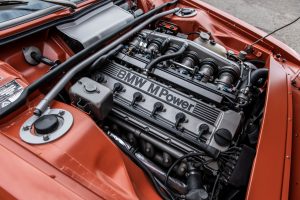 The engine is a E34-gen BMW M5 model. Apparently, it has a mated four speed transmission. It produces 311hp good for a car from the 1970s.

The BMW car price is not revealed. But considering the owner of the car and the charges SpeedKore normally take from celebrities, it is going to be on the higher side. While it might not be in the million range, it will one day be sold in millions because of the car’s celebrity status. “The great part about working with Downey is he actively participates in the styling of the vehicle and the final product reflects his unique style through and through,” SpeedKore vice president Dave Salvaggio told the Top Gear. Nice to know about another celebrity classic car enthusiast.