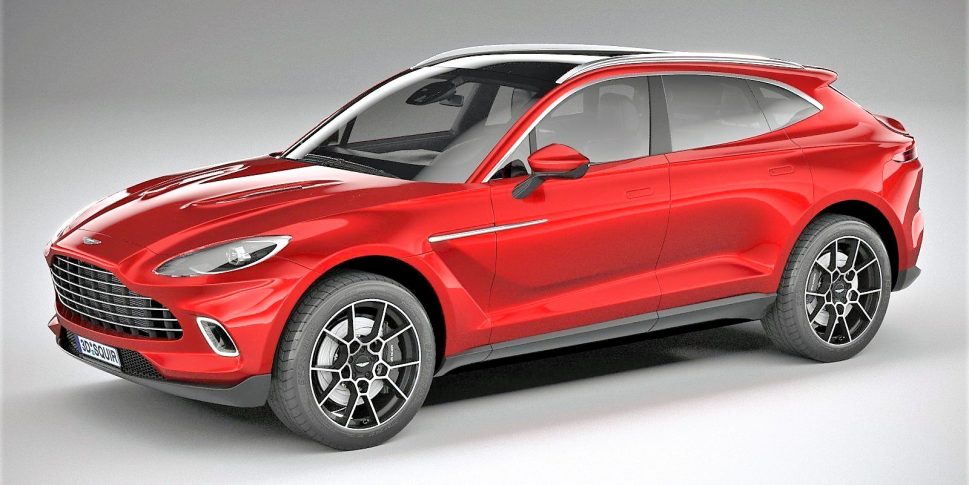 Aston Martin DBX is the first SUV from James Bond’s favorite Automaker. The British Automaker is more than 106 years old. Over its course of life has gone through tough times with seven bankruptcies. Aston Martin is trying to revive its fortune with this new DBX SUV. It is joining the SUV market very late. It is already dominated by major players like Lamborghini, Bentley and Rolls Royce. Will Aston Martin’s new DBX survive the already existing competition? Let us see in this article, how the new DBX stacks up against its competitors. 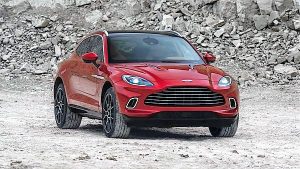 Aston Martin has absolutely nailed the SUV design. They have made the car longer with a very large wheel base. Also, the car stands at almost 5 meters. Apparently, this is the longest of any cars Aston Martin has ever built. 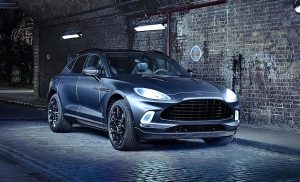 There is a crisp line that rises from the nominal base surface outboard of the grille. The sharp lines defines the convex hood surface and a concave area inboard of the front fender. This has provided a nice play of contrasting shapes. The roof rails provide a subtle glint of bright metal trim and can hold more than 100 kilograms. There is also another line edge that rises from the hood plane, with a concave surface on both sides. The deflector blade inside the outlet finished with bright metal adds styling to it.

The grille perimeter is cut relatively simple, without any trim at all. Intakes for brake-cooling air are the boldest trim pieces on the car. They are hidden in the center of the square fog lights. There is a sharp demarcation between the plane into which the grille is incised. And the top plane of the protruding corner buttresses. There is also an air inlet that continues across the front end’s entire width. Six really thin grille bars are artfully modest and quite convincing carries the Aston Martin trend. It adds a lot of visual appeal to the vintage Aston Martin looks. 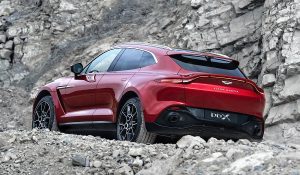 The perimeter of the very small diffuser is vaguely dumbbell-shaped. The pop-up reverse camera idea is a subtle design well executed. The wing, sculpted into the body surface behind the backlight leads to a beautiful spoiler. It blends well with the overall design.  Apparently, the Centre part of the line contains the break light for regulatory requirements. Also, the well proportioned lettering of Aston Martin is very elegant. 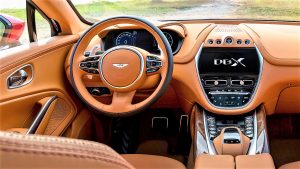 Aston Martin has left no stones unturned when it comes to the interior design. Moreover, the build quality is one of the best I have ever seen in any cars, not just SUVs. Apparently, the interior is not as fancy as the one shown by Aston Martin in the 2015 Geneva motor show as shown below. 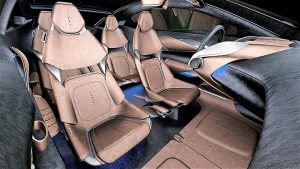 This is one of the largest SUVs ever belt. With the long wheel base, Aston Martin has nailed the rear seat leg room and head room. Evidently,  this is a big car with high turning radius and better handling without compromising on interior space. 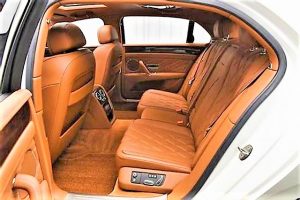 Like every other Aston Martin, this also comes with all the luxury goodies. Also, It comes with handcrafted suitcase, luggage bags, etc. etc. 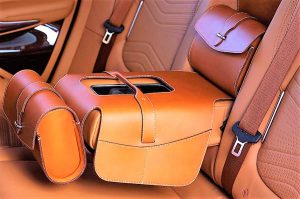 Aston Martin is very confident that this car is going to be a game changer for their business. Overall, the car is very promising. All the review so far are very positive as well. 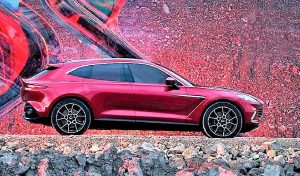 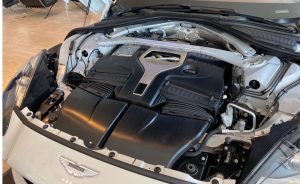 The DBX can accelerate from 0–100 km/h (0–62 mph) in 4.5 seconds, with a top speed of 292 km/h (181 mph). A 9-speed automatic gearbox is standard. The towing power is up to 2,700 kg. A 48-volt electric active roll system counteracts body roll under hard cornering. Apparently, The Aston Martin DBX also comes with five driving modes: a default GT, Sport, Sport Plus, Terrain and Terrain Plus with an additional Access mode.

As per the statement made by Aston Martin, the DBX would cost around 158,000 Pounds (GBP) for the base model. Also, the top end model with all the options would come up to 194,000 Pounds (GBP).