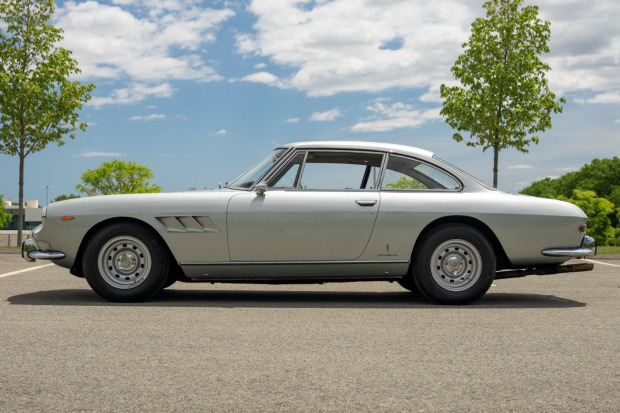 This 1966 Ferrari 330 GT 2+2 is one of 424 left-hand drive Series II single-headlight coupes produced between 1965 and 1967 and was first sold by Luigi Chinetti Motors in New York. The car was reportedly purchased by the second owner in 1973 and remained in his possession until 2018. It was subsequently sold on BaT in April 2019 and was acquired by the selling dealer in 2021. The car is finished in silver over black leather upholstery, and power comes from a numbers-matching 4.0-liter V12 paired with a five-speed manual transmission. A service performed in 2018 reportedly included the installation of a new clutch master cylinder and tires as well as refurbished brake calipers, while a May 2021 service included the installation of replacement spark plugs, a heater hose, fuel filter, and battery, rebuilds of the carburetors, fuel pump and distributor, and a coolant flush. This 330GT is now offered in Massachusetts with a tool roll and a Virginia title. 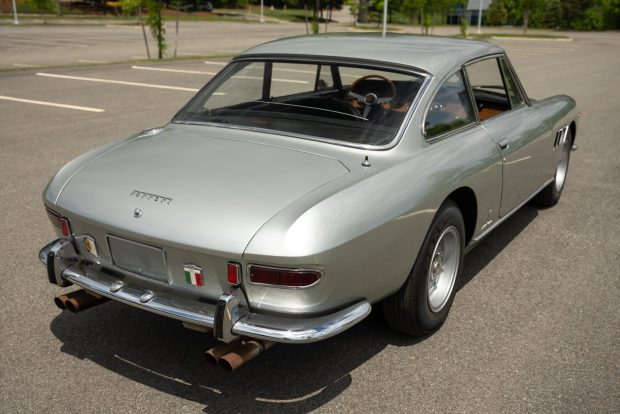 Designed by Tom Tjaarda at Pininfarina, this 1966 Ferrari 330 GT debuted at the Brussels Motor Show in early 1964 as a replacement for the 330 America. It features a longer wheelbase and a wider grille than its predecessor. The facelifted Series II model was introduced in 1965 and features single headlights. 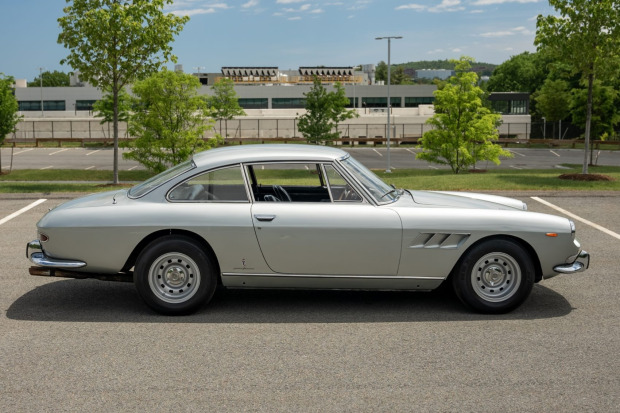 This example is said to have been repainted in its current silver prior to being placed into storage from 1978 to 2018. Enamel Ferrari and Italia badges are mounted above the rear bumpers, and a Naval Surface Weapons Center parking pass is affixed to the front bumper. The glass is missing from the driver-side mirror.

The 15″ Campagnolo wheels are said to have been refinished in 2018 and feature three-eared spinners and 205/75 Nexen NPriz AH5 tires. The brake calipers at all four corners were reportedly refinished by Goldline Brakes of Port Orchard, Washington, in 2018. An imperfection in the left-front wheel finish is visible. 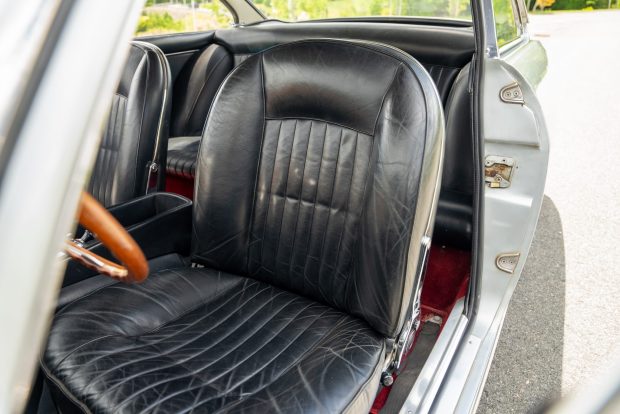 The cabin features bucket seats trimmed in black leather with a matching rear bench, dash pad, and door panels, as well as contrasting red carpets. Equipment includes a Becker Grand Prix radio, power windows, and hanging pedals, the latter of which replaced the floor-hinged units found on Series I cars. Wear on the carpets can be seen in the gallery, and there are holes in the rear parcel shelf from removed speakers. 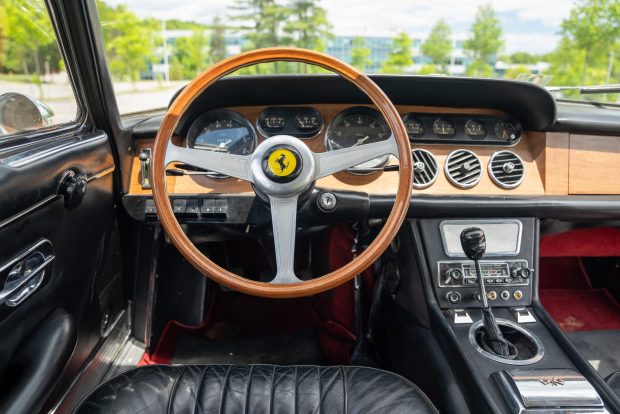 The wood-rimmed Nardi steering wheel fronts a wood-paneled dash featuring Veglia instrumentation including a 180-mph speedometer, a tachometer with a 7k-rpm redline, and auxiliary gauges. The five-digit odometer shows under 31k miles. 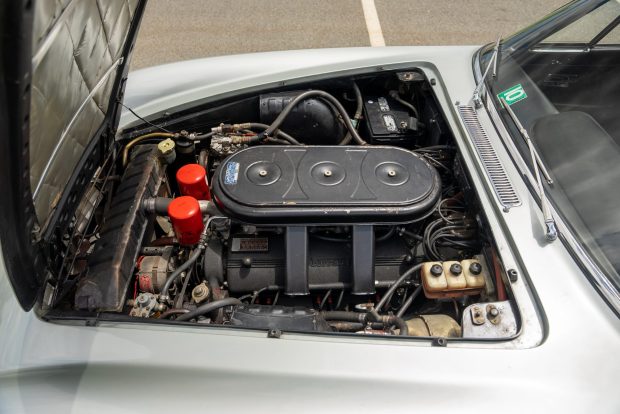 The 4.0-liter Colombo Tipo 209 V12 features triple carburetors and was rated at approximately 300 horsepower when new. The carburetors are said to have been rebuilt in 2018, and again in May 2021. Additional work performed at the same time reportedly included a coolant flush, rebuilds of the fuel pump and distributor, and replacement of a heater hose, fuel filter, spark plugs, and battery. 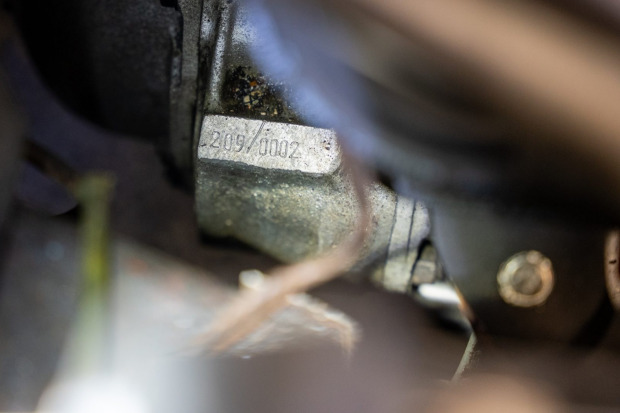 Engine stamping 209/0002 matches the engine number listed on the chassis plate viewable below. 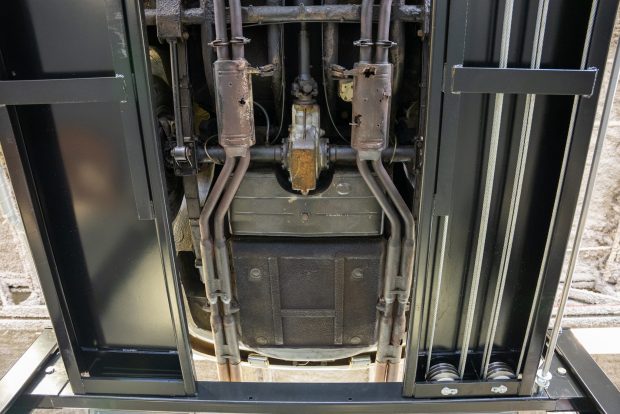 Power is sent to the rear wheels via a five-speed manual transmission. A new clutch cylinder was reportedly installed in 2018. Holes in the mufflers can be seen in the gallery, and the exhaust system will require replacement according to the selling dealer. 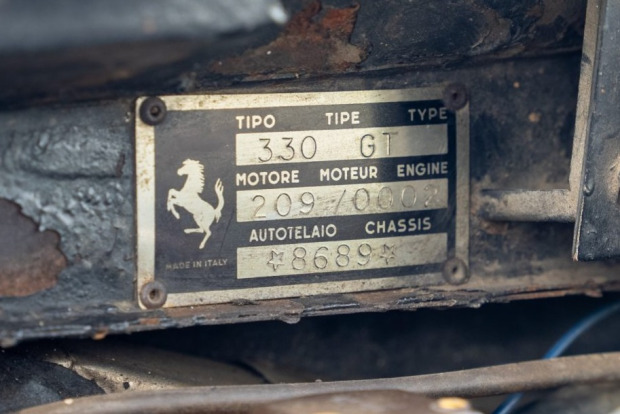 The chassis plate lists the model, engine number, and chassis number 8689. The VIN on the title is listed as 8689E.